We have an old MiniHelix 35w laser in the shop that I am trying to get running. It engraves, it cuts but there are several issues I wanted to see if anyone had any advice on. I know virtually nothing about laser engraving and cutting, the first time I'd ever even seen one in action was when I got this one connected a couple of weeks ago.

2. ENGRAVING - I'm not getting much depth. I can lightly etch acrylic giving it a decent frosted look but I was expecting to be able to slow things down and get a better depth. Even 1/32" would be nice.

3. WORKING AREA - The machine has a 12" x 24" working area....I can realistically use the top left 6" x 6" area. Once outside of that it's like the laser loses strength. I am currently running a 12" x 12" wood block....the left side is beautiful...then fades to nothingness on the right side. I checked the focus using the focus tool and used that to make sure the "deck" was level all the way across and everything seems to be perfect. I even tried shimming up the right side to see if that helped but it didn't.

I've cleaned the lens and the reflector with a lint free swab wipe and purified water. The Epilog help section isn't really very helpful. Is the machine just underpowered? Out of whack? Worn out? Anyone have any ideas? 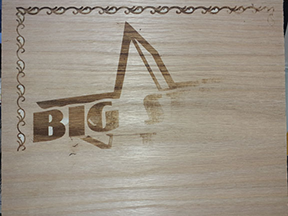 Something is up, we don't run Epilogs, but a 35 watt machine should have no issue cutting or engraving acrylic, a 4"x4" square should cut in about 20 seconds or less, and you should be able to engrave to a depth of about 0.5mm in 1 pass no problem.

For the laser not engraving uniformly across the whole area, the first thing to check is your beam alignment, as the machine moves the laser beam can stop hitting the middle of the mirrors and lenses and cause these issues, there should be something in the manual about aligning the beam. This may also be causing your first issue.

It can also be a laser tube that is on it's way out, which isn't a cheap fix, there are some places that recharge the tubes for about 1/2 the cost of new, but expect a few thousand $ for a new tube.

I would recommend making a post on sawmillcreek.org the guys in the engraving section there know their stuff and will have better suggestions than I would.

Thanks so much for that advice. Did the beam alignment today and the thing is working perfectly. It cuts through 1/4" luan plywood quickly and beautifully and I'm getting deep engraving all the way across now.
C

Pat Whatley said:
Thanks so much for that advice. Did the beam alignment today and the thing is working perfectly. It cuts through 1/4" luan plywood quickly and beautifully and I'm getting deep engraving all the way across now.
Click to expand...

Glad to hear it all worked out! keep the optics clean and in alignment and that machine will serve you well for years!
S

Hey Pat Whatley , if you ever want to sell the laser, let me know. I don't have a big volume but tired to outsource my job and don't know what quality I will have.
Show hidden low quality content
You must log in or register to reply here.
Share:
Reddit Pinterest Tumblr WhatsApp Email Share Link
Top