Would anyone be able to identify this font used for these large channel letters??

Thank you in advance!

If these letters are old enough, it is likely they were not based on any known typestyle.

Back in the day, the first step in fabricating channel letters was to draw the letters on paper with pencil or charcoal. These paper drawings served as patterns for cutting the plastic faces with a jig saw, sabre saw, or band saw. Occasionally, we copied a printer's typestyle, usually when a logo was being duplicated or when an architect specified a typeface. But, generally, we did not try to slavishly copy printer's typefaces—that usually required using the projector and added unnecessary time to the job.
Also, many typestyles did not fabricate well into channel letters (many romans, for example).

Learning to draw letters, and later, to create letters by brush without actually drawing them, was a skill that took years to acquire. And, of course, some sign makers were better than others. The letters in the above picture look a little squirrely, so my guess is they were drawn by hand rather than generated from a computer. I could be wrong, of course. My knowledge of typestyles is not extensive.

We sign painters used the term "alphabet" when referring to letter styles in a sign shop. These were committed to memory and often modified as needed. (The word font did not exist in the sign maker's vocabulary. Font was exclusively a printer's term. Fonts referred to collections of metal type used in printeries, stored in trays and cabinets and purchased from foundries. The word was never used as a synonym of typestyle till recently).

Interestingly, regarding copyright, both the US Congress and the US Copyright Office (USCO) have long held that a typestyle, or typeface, that is, the design of the letters, does not qualify for copyright protection. However, a font is protected by copyright. The USCO uses the term font to refer to, not the style of the letter, but to the underlying digital code used to produce the letter in print. A font is protected as a computer program, that, when loaded onto a computer, allows us to produce a typestyle that we can see.

A good explanation for font versus typestyle in nonlegalese is found at the site of Georgia Lawyers for the Arts—
"A typeface is a set of letters, numbers, and punctuation marks whose forms are related by repeating certain design elements that are consistently applied. Put more simply, typeface refers to the way a set of letters or numbers appears, whether on a page or a computer monitor. Something like “Times New Roman” or “Comic Sans MS” is a typeface. A font, on the other hand, is the computer program that tells the printer or computer display how a letter or character is supposed to be shown. So what most people refer to as “fonts” are actually typefaces!"

Of course, these days, as meanings have blurred, everyone seems to have their favorite definition of "font." But, then, language is never static. It is a living, breathing animal that constantly evolves.

I realize that I didn't really answer the original question, and if my goal was to stray completely off-topic, I did a good job.

Thank you for your input Brad, very informative.

I do believe these were hand formed and loosely based on a typestyle. There are many different curves and thickness' going on which leads to believe that. I am mostly looking for a similar typestyle that one could use as a baseline to build a more closer representation of these letters. This set was installed about 2005, being 15' high letters, very well could have been ALL done by hand. 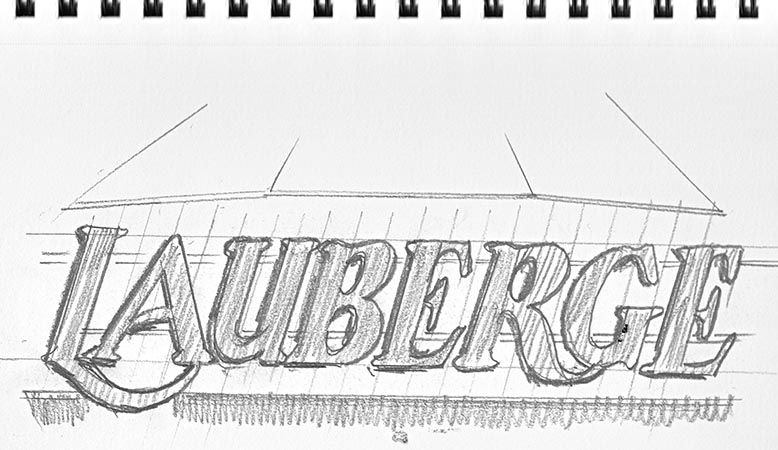 Nice sketch Johnny! I started to have one of my designers re-create the letters, he should have it completed today. Then the fun can begin!

It looks to me like it was inspired or based on BT Arrus - the font!
(I've drawn and painted it enough times to recognise those uneven top serifs...)

Beautiful Signs for a Better Planet

In case it's helpful, in past situations like this we have auto-vectored from things like your photo, then cleaned up by hand in order to make new artwork that can be output. Time consuming but sometimes its the only way...
K

In Your Font book (Adobe First) the A is the quick identifier.
The move onto the B, but the L is a better Identifier.

The rest of the lettering is similar to a zillion other fonts.

But if you find a hit on the A and can not conclude, Break out
Your Font Haus Master Volumes, Find the Adobe Font and then look at the secondary suggestions (Eyeball icon looks like).

If this is an old font Font Haus would have it, and Old fonts are some times
LetraSet.