Hi. Using text that is overlapping (cursive) and when sending it to the plotter it takes the vector lines and cuts all the lines and... evens cuts the overlapping areas.
When I weld the letters (after I convert the letters to curves) the inside of the letters is erased.
How can this be done?
Thank you and God bless.

you need to combine the overlapping shapes. I think in Corel it's called "welding". In Illy it's called "unite".
Edit, I didn't quite read your whole message. What I do to prevent loosing inner circles , I use the direct selection tool and "area select" just the parts that overlap and unite that. It's a little tedious.
S

Depends what software you are using. If cutting with a Graphtec in the pen tab you click on "Eliminate Line Segment Overlap".
R

Welding the text (to itself) should work fine in CorelDRAW, no need to convert to curves first. You can but it is not necessary.

Are the inner curves completely gone, or are they still there but filled (check in Wireframe view mode)?
Sometimes when text is welded, the curve direction in combination with the "wrong" fill modes will make inner curves disappear.
To correct this, either make sure "Fill Winding" is unchecked (in Edit Fill dialog or Properties docker), or use the Shape tool to select node/nodes on the invisible curves and click "Reverse direction" in Property Bar.
B

JBurton said:
Ahh, in corel, welding works, but only if you select the outside of the characters alone, not the inside. Usually I'll just select one letter at a time, otherwise it may generate artifacts between the first and last letter.
Click to expand...

In CorelDRAW here's the trick that works: when you first convert a text object to curves go to the Object menu, choose Shaping and select Weld. It will work on a single selected object. That will cleanly remove/weld-over any areas where letters are overlapping each other (such as connected scripts). The alternative is breaking apart the text object, re-combining letters with compound paths one by one, then selecting the whole group of letters and finally clicking a weld button (a button that often only makes itself visible when multiple separate objects are selected).

OpenType Variable Fonts can sometimes be messy with overlaps, with the overlaps occurring in each individual letter. This can vary from one OTF VAR typeface to the next. Some like Acumin Variable Concept don't have overlaps; others like Helvetica Now Variable have lots of overlaps. Converting the text to curves, breaking the object apart and then trying to combine or weld letter by letter can yield unpredictable or just plain wrong results. Again, the Object Menu>Shaping>Weld trick works reliably well. The only hang-up there is some long text strings converted to curves have to be ungrouped before Object>Shaping>Weld can be applied.

In Adobe Illustrator the "Unite" command in the Pathfinder palette works very well regardless if a single object is selected or multiple separate objects. As far as I can tell the button/command always removes overlaps, unlike expanding strokes into editable objects. Sometimes an update to Illustrator will goof up the non-zero winding rule where overlaps are allowed to knock thru and reveal negative space. The setting can be changed in the Attributes palette. This is an important trick to remember when handling "Messy Marvin" Illustrator artwork from people who do not do sign work. They go stupid nuts with the outline strokes and have probably never heard of the Offset Path command.
Last edited: Jan 11, 2023

Corel X5
Thank you everyone for your input. I went with welding the letters (in original lettering, not converted to curves) and it works out.
Once you select the text all you need to do is... ARRANGE / SHAPING / WELD. That's it. You need to go through the upper menu and select the weld because it doesn't automatically show up on the "workspace" as you would think. I just made a shortcut for the 'Weld" action icon and placed it on the workspace so it's always there.
R

Glad to hear you got it to work (the easy way).
FWIW, I have assigned shortcut keys to Weld (Alt+W), Trim (Alt+C) and Intersect (Alt+A) and I use them all the time.

In our earlier version of plot software (FineCut) I had added a macro to the cut code to throw an error code if something intersects. That way if one forgets to Weld as mentioned it'll remind you to check where the overlaps are. We lost it when we upgraded FineCut. Something that should be worked into all cut programs.

I do have the macro in corel and use it occasionally to check myself before sending for cut. 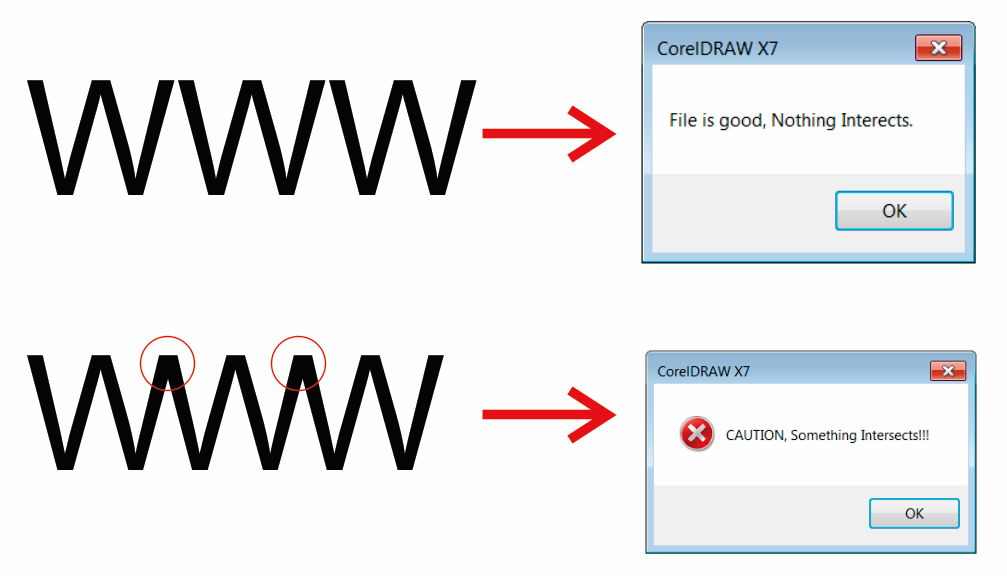 Interesting myront.
I use FineCut myself and have often thought it would be nice to get a warning when curves intersect, before sending to the plotter.
B